In 1922 the BBC will have been broadcasting for one hundred years, first as a company and from 1926 as a public corporation which acts in the public interest, not that of the Government of the day, rather like RTHK. 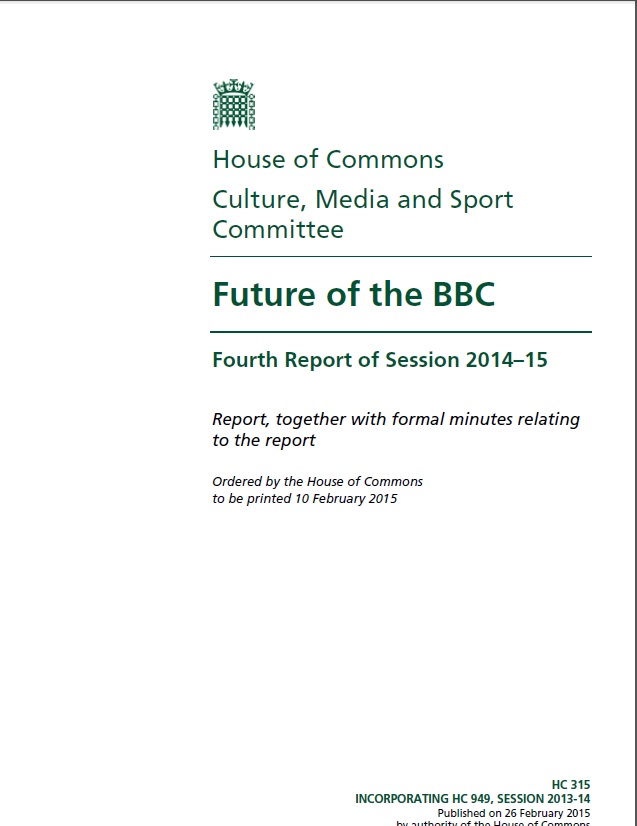 The BBC's legal existence is set by the Royal Charter and the next Charter should come into effect at the end of 2016. Each Charter runs for ten years (sometimes more) but the time when it is due for renewal is a key opportunity for debates about how well it has performed together with a focus on its size, scope, funding and governance.

Enemies of the BBC as well as supporters join battle to determine its future. Discussion about the next Charter have begun commencing with a report from the Westminster Parliament.[1]

Unfortunately the BBC has scored a number of own goals in recent years: expensive pay-offs to departing executives; the scandal of abuses by the late Jimmy Savile and the way in which the fallout was handled and the usual complaints from the usual suspects, generally those with a vested interest in breaking up the BBC- eg The Murdoch press etc and not 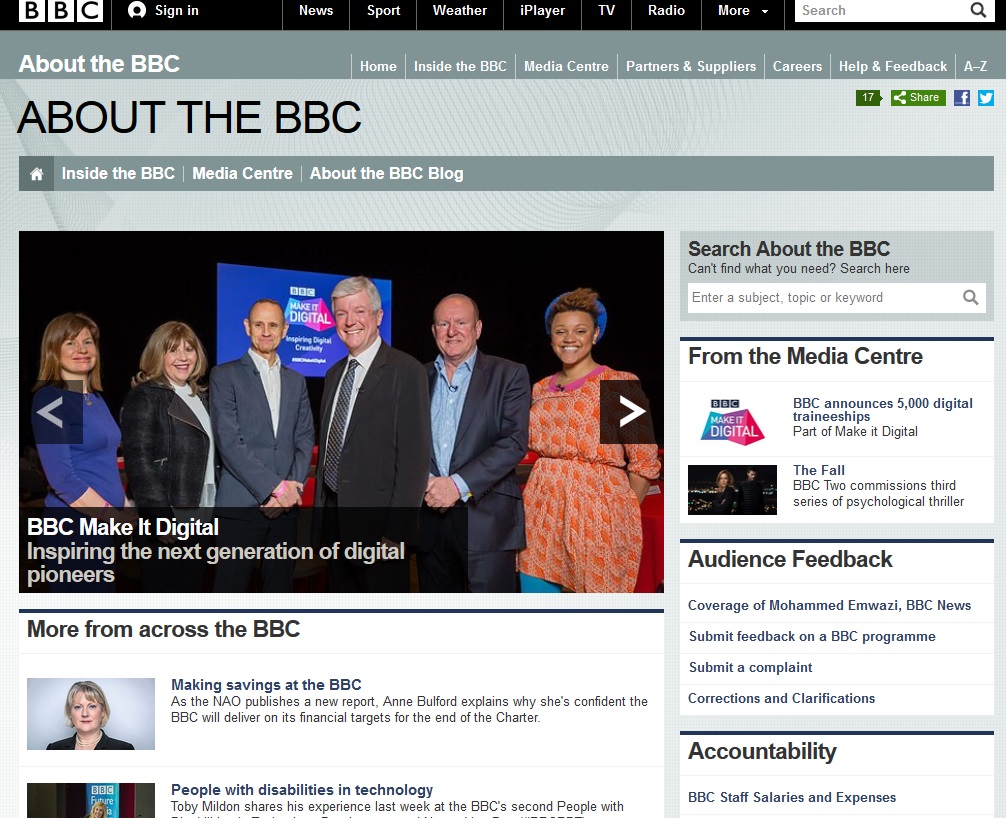 least a widely perceived failure of the relatively new BBC Trust to succeed in its oversight of the Corporation.

Add to this the rapidity of technological change in the creative and cultural industries, and we can see that determining the place and future of the BBC in the ecology of British and global broadcasting involves thinking about and addressing a series of complex issues.

What are the questions for this Charter? The Select Committee report runs to over 160 pages and 66 recommendations but the primary areas of concern remain as they have always been: ie 1 Funding, Governance, Independence and Accountability; 2 Scope and Size; Economic Impact, Competition and Value for Money.

Although each impacts on the others, this article will focus on 1 with the next article dealing with 2.

Can the television licence fee continue in the digital age? When young people watch TV online or on mobile phones and tablets, does a licence fee based on the ownership or presence of a television set in the home make sense?

The report suggests that – in the long term – it might be useful to think about paying for the BBC through electricity or gas bills as is being adopted in Germany- rather than having a separate licence fee which some avoid. Meanwhile the licence fee is, like democracy, the least worst option- especially when you consider the others.

The report suggests that the licence fee income should also come from those who use BBC radio, online eg the i-player when they do not use television which has the merit of justice.

It is also very good news that they intend to improve the way in which the licence fee is set. The 2010 settlement was imposed on the BBC by the then Culture, Media and Sport Secretary Jeremy Hunt who went on to have an 'interesting' part in supporting the business interests of BBC competitor Rupert Murdoch and News International's bid to take over BSkyB until the phone hacking exposed criminal wrongdoing.

Unfortunately that licence fee settlement also set the precedent of top slicing the licence fee - in this case enabling some money to be set aside for local television services, some of which was to be awarded to BBC competitors and the Committee report seeks to continue the policy of allowing licence fee income to go elsewhere.

As the committee puts it:

A broadcasting levy would enable a small proportion of the revenue raised to be used to fund public service content and services provided by others, enhancing plurality in certain types of content. For example, we support a small proportion of the licence fee (or broadcasting levy) being made available for public service content priorities such as children's broadcasting and local and regional journalism. In addition, we recommend extending the BBC's independent production quota to cover local news.

Add to this the possibility of public service broadcasting from the licence fee being defined as some core services with conditional access being introduced.

“We conclude that a degree of subscription could be a possibility in the future if the BBC moved to a more personalised service but as a minimum the licence fee must be amended to cover catch-up television as soon as possible.

In any event, the BBC should look at the practicality of introducing controls for authorising access to the iPlayer.”

Introducing subscription for some channels or services might seem attractive- at first- but in time could or would (?) pave the way for subscription as the primary way of paying for the BBC.

Subscription would be an attack on universality: it divides the audience, the citizens into the haves and the have-nots. It attacks the idea of public space. The BBC is not just news and current affairs. It is a public and national conversation in which the programmes achieve public purposes.

The programmes inform, educate and entertain – across the board. It is not that some of the content could not be supplied by the market; by competitor broadcasters but that the BBC has a relationship with licence fee payers which means that it has a right to make and supply content for each one of us and the funding mechanism means that a programme with a smaller audience but high audience appreciation can survive. The size of the audience or indeed the audience profile is not everything.

The BBC is and should be here for the people- not for those in power. The BBC has a relationship with listeners and viewers, not just as consumers but as citizens. It provides a public space where everyone has equal access to information and ideas and each of us is thus equal to that extent.

At the last Charter renewal, the then Labour government and Parliament removed the BBC Governors and replaced them with the BBC Trust while giving some powers over the BBC to the regulator OFCOM – the Office for Communications - although decisions over impartiality and accuracy were reserved to the Trust.

Now the BBC Trust is to be abolished and the BBC fully regulated by OFCOM.

“that a new Public Service Broadcasting Commission (PSBC) be established with the role of scrutinising the BBC's strategic plan, assessing the BBC's overall performance, and determining the level of public funding allocated to the BBC and to others.”

Here the devil is in the detail and easy to miss. The add on "and others" confirms that the television licence fee is to be further top sliced and made available to or granted to other broadcasters and content providers.

This is the slippery slope. This new body could award licence fee (or levy money) to specific programming and thus stand in danger of compromising the independence of the broadcasters.

This is a kind of Arts Council of the Air and it runs the risk of being perceived to award money to content which supports the status quo rather than material to which those in power may object.

It should be for the broadcasting institutions, for the broadcasters to exercise their professional judgement, not for a kind of regulator to decide which genres are worthy of support and which not.

Moreover, this level of involvement could constitute direct state control. This would be worse than what some have seen in the past as indirect state management of broadcasting.

Many years ago the commercial broadcaster Thames Television lost its licence to broadcast not long after upsetting the Conservative government with Death on the Rock.

This dealt with the killing in Gibraltar, by the SAS, of an IRA team and the British government was deeply angered by this broadcast.

One cannot prove that the demise of Thames TV was due to this programme or that the then regulator had taken this into account but the suspicion remains and this called the integrity of the franchise awarding process into question.

At that time, it was the Independent Television Commission which dealt with complaints and awarded licences. Now it is OFCOM. Would OFCOM have taken a different decision? How independent is OFCOM? Should the BBC be regulated by OFCOM in respect of impartiality and accuracy or would this compromise the independence of the BBC?

The report states that

“We see Ofcom continuing to play its part in assessing BBC competition issues and acting as the final arbiter of all complaints regarding BBC content including on matters of impartiality and accuracy.  We believe this transfer of responsibility will, if anything, strengthen the independence of the BBC, and make the complaints process simpler, and appear more transparent and fair.”

The problem here is simple. Can we be sure that OFCOM would stand up to the government in ways and with the strength that the BBC Governors managed to protect the independence of the BBC- at least most of the time.

Can we really trust this regulator to be independent? The history of the BBC over nearly one hundred years is of lesser or greater tensions with Conservative, Labour, Coalition and now in Scotland Scottish National Party governments alike.

That this has been so and just as importantly been seen to be so is a fundamental strength of the independence of the BBC.

When have we seen the regulator OFCOM in public opposition to the government of the day? How can we be sure that – when the chips are down- OFCOM will protect the values of impartiality and accuracy. Unlike the BBC, we have not seen public spats and resignations from OFCOM on points of principle etc.

The BBC is trusted precisely because it stands up to governments- even if one does not always agree with the stance taken. Interfering like this with the impartiality and independence of the BBC runs the risk of reducing the hard won trust enjoyed by the Corporation. 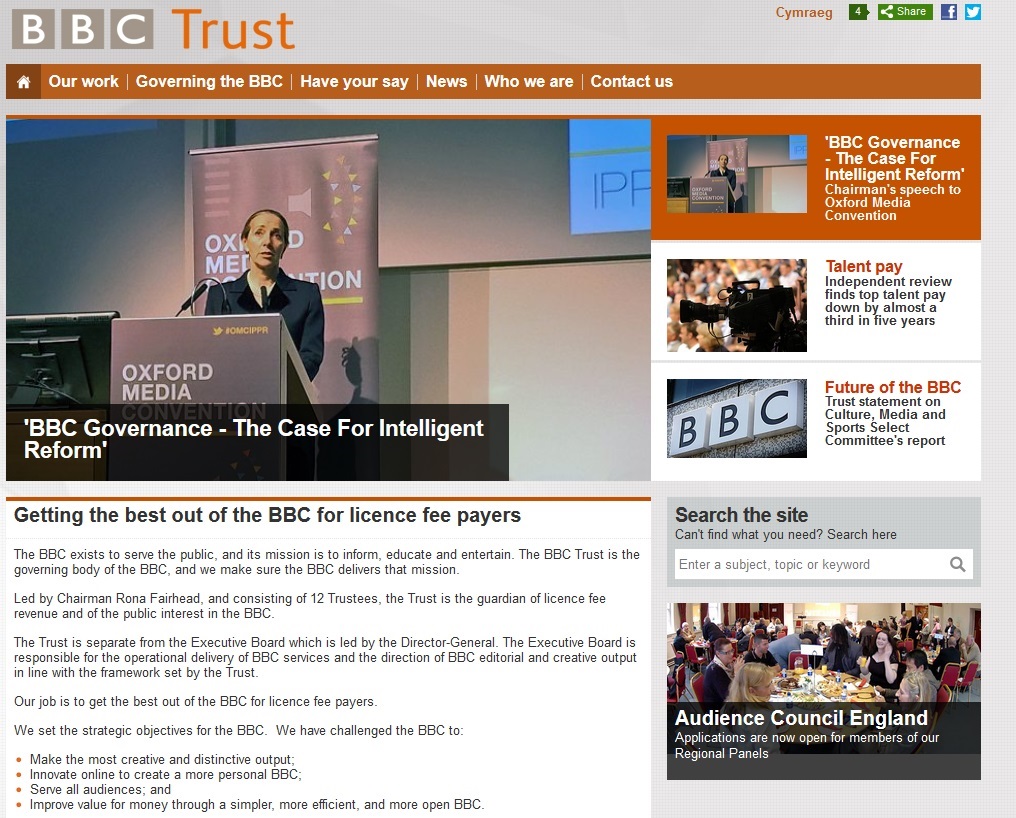 It was not for nothing that the structure which replaced the Governors was called the BBC Trust. But neither the BBC governors (1926-2006) nor the BBC Trust (2007-2016) had the power to tell BBC journalists what or how to report the news.

That is as it should be but there is now a need for the governance and accountability of the BBC to become more nuanced but also transparent than it has been heretofore.

As the UK evolves into a kind of federal State, the BBC itself needs to become a more federal and decentralized in its organization.

The Scottish Parliament – representing the people living in Scotland (as well as the Welsh and Northern Ireland assemblies) has a legitimate right to become more involved in holding this public corporation to account for at least its stewardship of public money.

The committee argues that

“The process for agreeing the future shape, funding and constitution of the BBC must be as thorough, open and democratic as possible.”

I agree entirely. What is absolutely the case is that all citizens should become involved in such a debate. It is in their interest and that of their society: Indeed one could go further and say that all societies should ensure that their media policies are open, democratic and accountable thereby enabling the public interest – economically, politically and culturally - to be secured in the future.

The BBC has served the UK for nearly one hundred years. In the future it needs to do better in terms of serving the sometimes conflicting needs of the constituent nations of the UK, in my judgement, especially, although not only, Scotland and if it does so it would still have a good chance of remaining the best loved and most respected broadcaster.