Behind the Digital Divide in Hong Kong

As the Internet has become an increasingly important source of information, interaction and wealth, the issue of digital divide has grabbed the attention of policy makers, social scientists and the populace throughout the world. Underlining this issue is the long-standing concern about social and economic polarization of the information-rich and the information-poor.

To understand the digital divide in Hong Kong, we have conducted a probability sample survey of the adult population in this territory as part of a global research project on the social impact of the Internet initiated by the University of California, Los Angles and undertaken by researchers from more than 20 countries. The project has been guided by a theoretical frame that integrates the processes of adoption, perception and behavioral choices, social impact, and demographic characteristics.

The survey, which was the first wave of a three-year tracking study, was carried out in Hong Kong during the last week of December 2000. All together 1,007 adult Chinese were interviewed through the phone, which translated into a sampling error of ±3%. The response rate was 38% according to the industry standard calculation method (AAPOR RR3). In our statistical analysis, the sample was weighted based on the joint distribution of age and sex in the population in December 2000 (Census and Statistics Department, 2001). 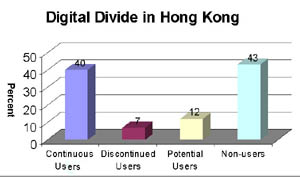 Of the 1,007 families in our sample, 69% are"PC Homes" with at least one computer, 52% "Internet Homes" whose PCs are connected to the Internet, and 21% "Broadband Homes" whose Internet connection is via broadband.

Using individuals as the unit of analysis, we have found that 40% of the 1,007 respondents are "Continued Users" of the Internet, 7%"Discontinued Users"who have stopped using the Internet (but 5% are likely to use it again), 12% are"Potential Users"who are"Very Likely"or"Somewhat Likely"to do so in the next 12 months, and 43%"Unlikely-Users"who will not use the Internet any time soon.

Users of the Internet are mainly a young, well-educated and professional group. 75% of them are in the 18-24 age group, 78% of them have an education at or above the college level, and 51% are employed in various professional fields.

Internet users have been on line for an average of 3.4 years, spending 629 minutes (or 10.4 hours) per week on this new medium, including 350 minutes at home, 262 minutes at workplace or school, and 17 minutes elsewhere. The users spend the largest amount of online time on searching for work- or- study-related information (200 minutes per week on average), followed by receiving/sending E-mail messages (175 minutes), searching for personal interest information (104 minutes), and reading online news (90 minutes). The activities that attract the least time include online chat or discussions (52 minutes) and online games or other entertainment (35 minutes). The users allocate about half (48%) of their online time to local websites using Chinese language, another 15% of the online time to overseas sites using Chinese language, and the remaining 35% to non-Chinese language sites, local or overseas.

E-mail appears to be very popular among Hong Kong users, with 57% of them using it at least once per day and another 32% on a less frequent basis. Only 11% of the users do not use E-mail.

As compared with the users, the non-users share similar sex ratio, family income, and marriage status, but are significantly older, less educated, and less likely to hold a professional or managerial job. In addition, the non-users are more worried about negative impact of the Internet. Among them, the potential users are younger and more positive about the Internet than the unlikely users. Of various reasons cited for not using the Internet, lack of knowledge ranks the top (by 34%), followed by lack of interest or need (25%), lack of computers (16%), lack of time (12%), and fear of the technology (9%).

After controlling for age, sex, education, occupation, family income, and marital status, the users and non-users demonstrate a number of significant differences in perceptions and behavior. The users are more positive about the innovativeness of the Internet, less concerned about the negative impact of the Internet, more suspicious of the political empowerment of the Internet, view television and newspapers less credible, and spend less time (about 20 minutes per day) watching television.

Of all the variables tested to establish a causal relationship, the number of Internet users at home has been found to be the strongest predictor of Internet use. This shows that socio-cultural setting is the most important factor that influences the adoption of the Internet in the Hong Kong context. Education is also a dominant determinant of Internet adoption, followed by age (the younger the people are, the more likely they are to use the Internet), and perceived compatibility.

Our data also have shown that socio-economic status and perceived compatibility of the Internet affect both Amount of Online Time and Diversity of Online Time, the two operational versions of Internet use in the study. In particular, the current study is the first attempt in media research literature to empirically measure and analyze the diversity of new media use. The data have demonstrated that our operational measure of diversity is quite robust and sensitive to causal influences. The most surprising finding is that we have not found any evidence for the hypothesized link between adoption and use of the Internet. The finding is both clear-cut and consistent because neither of our measures of Internet adoption (i.e., Adoption Status and Adoption History) has any significant impact on either of our measures of Internet use (i.e., Amount of Online Time and Diversity of Online Time). In addition, this finding is consistent with our study of the Internet in Mainland China that has also shown no causal connection between adoption and use.

The findings fully support a benchmark model developed by American media scholars William Dutton and Everett Rogers on the adoption of home computing by not only underscoring the importance of socioeconomic status and personal characteristics in the adoption process, but also demonstrating the critical role of socio-cultural settings and perceptions of technical features and compatibility. Those findings seem to accord with the observation that socio-cultural settings and perceived compatibility may be the key to explaining the slow diffusion of cable TV and the failure of interactive TV in Hong Kong.

Comparison with US and Beijing

By the U.S. Department of Commerce's definition, digital divide is the difference in the proportion of the population using the Internet between demographic or socio-economic groups. For example, a nationwide survey in the United States conducted by the U.S. Department of Commerce in summer 2000 found that 47% of men and 46% of women are Internet users, which means there is a 1% digital divide between the sexes. Compared with the results from the U.S. survey and our own survey in Beijing December 2000, the digital divide in Hong Kong is larger than that in both the U.S. and Beijing across almost all demographic and socio-economic groups. The biggest gap in Hong Kong exists between young and old people (gap=64%). This gap is much wider than that in the United States (27%) and closer to that in Beijing (55%). Another thing that differentiates Hong Kong from the United States and Beijing is the gap between groups of different education backgrounds (50% between those with and without a college education). Apparently, in both Hong Kong and Beijing, the Internet is the "toy" of young people at this stage of this new technology's diffusion. However, as the trend in the United States shows, the diffusion process of the Internet may eventually draw in people at older ages and with less education.

The findings of this study offer several policy implications in Hong Kong, a city that is striving to make a transition from the old economy to the new Internet-driven one.

First, the government should provide more opportunities for people to receive a college education so as to facilitate the adoption of the Internet. The government's recent move to provide associate degrees in Hong Kong is apparently in the right direction.

Second, an effort should be made to promote the Internet among people above 50 so that the gap can be narrowed and the entire society can benefit from this revolutionary technology.

Third, a social environment must be created that encourages the spread of the Internet and views it as being compatible to social and cultural configuration in Hong Kong.