Music All The Way With RAY

The period 1928 - 1998 represents Hong Kong's 70th anniversary in broadcasting, and 70 years of progress and hard work marking the tremendous efforts of everyone involved, from the early days of only a few hours of broadcasting to today's twenty-four hours non-stop of good radio listening.

My career in broadcasting started way back in 1949 with REDIFFUSION as a script-writer.

In those days, presenters or DJs followed a script in their presentation, unlike the free speech trend we have today. Script-writers are the equivalent of producers we have today. My career as a D J started when Mr. Roy Dunlop, Head of English Blue Network, suggested that I had a go at voicing my own script, which I did and quite successfully. Being young and aggressive, I wasn't happy doing just that, so I produced two live shows. The first was "TALENT QUEST" which proved very successful, followed by "RUMPUS TIME" ─ a live show with audience participation, a live pop group, and games which created a lot of excitement.

I stayed with REDIFFUSION for eleven years, until the big switch to Radio Hong Kong in 1960 when Aileen Woods had to retire at the age of 75. I have worked under six directors, from Donald Brooks to my current boss, Miss Cheung Man Yee, with James Hawthorne, Donald Kerr, John Tisdall, C.S. Wilkinson in between. I used to work as Light Music Producer, and the joke was I had to share the same office with the Producer of Serious Music, Clive Simpson, simply because we were so tight for space, but we got on very well, despite the clash in music policy. Can you imagine auditioning Pop or Rock music with a person who loves classical music? Or vice versa?

Those were The Days

It is coincidental that the year I joined Radio Hong Kong was the year FM channels were introduced to the public. This meant a great improvement and pleasure to hear your favourite music on FM especially popular classical or serious music. 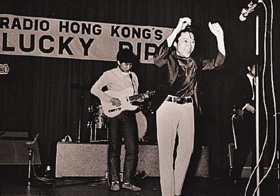 I cannot speak for the twenty years of music policy before my time, but when I took over from Aileen Woods, the grand old lady of broadcasting back in 1960, I knew that something must be done to enhance the music then put out by Radio Hong Kong, or ZBW as it was known then. That together with the knowledge I had experienced from the BBC course which I attended in 1964, prompted me to produce the live audience participation show called "LUCKY DIP" which for the first time on radio a show with a group of live audiences, pop bands, interspersed with discs played in the presence of the teenagers. The kids were allowed to hold the microphone and read out their dedications and requests.

This format went over like a bomb exploded right in their presence and boy, did they enjoy the show. This started a new trend with such a hugh success that the show had to move over to a bigger venue. From RTHK's Concert Hall on the 6th floor of Mercury / Electra House to the City Hall Theatre across the road. This hit show started a new trend of pop music here in Hong Kong, and the commencement of Pop Scene right to this very day.

Of course, the Hong Kong scene ran in cycle of ten years. I have witnessed the early ballroom scene where the singers with the bands sang in Mandarin and occasionally some Cantonese songs. When I returned to Hong Kong in 1964 from the BBC and London, I brought the Mersey beat which was then the rage in London with groups like the Beatles, the Searchers, Gerry and the Pacemakers, the Swinging Blue Jeans, Herman's Hermits, and others, to Hong Kong, and that started the pop craze here. Naturally I did everything in my power to promote the pop scene here with singers and groups and there were many. Gone were the singers with the ballroom bands, managers of these nightclubs were engaging the pop singers and groups. Plus the import of the Italian group, Gian Carlo and his Italian Combo, the Fabulous Echoes, and others, Hong Kong was ready to face this new trend.

And how did Canto-Pop get its start in Hong Kong? Sam Hui, singer with the Lotus Pop Combo, broke into films and he who was then an idol in his own right, composed his first Cantonese pop song and started this new trend known as Canto-Pop and the rest is history. Canto-Pop just hit Hong Kong like a tornado, and everyone just jumped on the bandwagon. Record companies just signed up singers right, left and centre, and that created another trend, from pop combos to pop singers. Then, Hong Kong music trend swing to what is known as "Disco" music. This started a new craze in Hong Kong and many rich investors poured money, millions of dollars, establishing new trendy "Disco" night clubs. As time goes by, these establishments closed down one by one with the investors losing their capital. Again, it tells us the music scene changes rapidly.

There are three very important milestones in my long career. The first happened back in 1964 when I met and interviewed the four boys from Liverpool, the Beatles, who were then at the top of their singing career. It happened quite by accident after my BBC course. I went to the EMI office in London and met a senior executive of the company who was introduced to me by his counterpart in Hong Kong. He was very friendly and asked whom I would like to meet and interview. Of course the first name at the top of my list was the Beatles. Very quickly he picked up the telephone and asked for Brian Epstein, the manager of the Beatles. Brian was very obliging and asked me to come up to the NAMS Enterprises the following morning where the Beatles would be having a press conference. This was my first meeting with John, Paul, George and Ringo who were very friendly and down-to-earth characters contrary to what I had expected. The interview began with Paul McCartney and by the time I had finished with the other three, I had 30 minutes of tape and an entire FAB magazine of the Beatles fully autographed by all members of the group. This is a priceless collection. Then I met the Beatles again one week later at another press conference - this time organized especially for foreign correspondents, only because the Beatles were scheduled to perform at the Far East, covering cities like Hong Kong, Japan and Australia. Being a foreign correspondent from Hong Kong, I jumped at the opportunity of meeting the fab four again, and they recognized me from the previous meeting and we got on very well. They asked me a lot of questions about Hong Kong. My third meeting with the mopheads was right here in Hong Kong when they arrived at Kai Tak Airport. The meetings with the Beatles were rather special, very special, because any DJ or reporter would give his right arm to meet and interview the Beatles just once in their lifetime, but I was the lucky one who had the pleasure of meeting them three times, an experience I shall always treasure and remember.

The second milestone in my broadcasting career was back in 1987 when I was awarded the MBE (a member of the Order of the British Empire) by Her Majesty, Queen Elizabeth II. I had a choice of either receiving the Insignia from the Governor in Hong Kong, or Her Majesty the Queen herself. Naturally, I chose to go to Buckingham Palace, anyone would jump at the chance of his lifetime to meet with Her Majesty, Queen Elizabeth. There I was at Buckingham Palace, complete with my Tuxedo and Top Hat for the first time in my life, at the great reception hall with 150 other VIPs from all walks of life. For the first time I came face to face with the gracious lady, completely in blue outfit, and she spoke to me very briefly and then pinned the medallion on my lapel. To me, this is an unforgettable experience and one that I shall always remember and treasure.

The third milestone in my career, was rather recently, when in December 1997, during Radio Television Hong Kong's launch of 70th anniversary of Broadcasting in Hong Kong, I was bestowed with "THE LIFE-TIME ACHIEVEMENT IN BROADCASTING AWARD" by one of my favourite pop idols, Paul Anka, who sang his composition "My Way" but changed the lyrics to commemorate RTHK's 70th anniversary and included my name in the lyrics. This was such a surprise to everyone present at the ceremony and an honour to have my name mentioned in his song. Thank you, Paul.